You are here: Home / Land Transportations / Bus Fun in Philippines 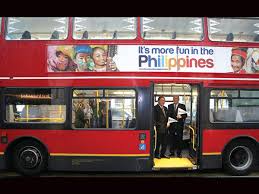 Of course, the chickens will be drained out by the distorted TV

Buses are by far the cheapest ways to travel distances around the Philippines, but can be difficult if you are a solo passenger as not everyone will understand your strange English accent. Mostly, people just say yes to you no matter what question  you ask. That is just the way it is here.

So you managed to find the point of origin and you turn up with cases or bags and most probably many helpful porters will scratch at your bags and offer to carry them. Sometimes the grabbing can be scary, so be prepared to hold on tight. I am not saying there is a thief around, just that the few yards carried is going to cost you money.

Grabbing a seat is the next fun. Some of the provincial buses have chickens and Durian as passengers. So be prepared for the smell and the noise. Of course, the chickens will be drained out by the distorted TV sound across all shaking speakers. If you are really lucky it will be in screaming Tagalog and full of over deep emotional over acting. Don’t worry it only lasts two hours or so.

Now most buses let you pay for the ticket on the bus. Here you wait until the conductor arrives and asks you your destinations and hands you a ticket with lots of holes in it and walks off. After an amount of time, he will return and ask for the money and will always say he has no change and will have it later. That later could be an hour or more. Be prepared to remind him just in case. I once had the conductor change and the new conductor had no change for me- strange that.

Now settle down and enjoy the trip. In and around Manila the buses are getting much better with air con and comfortable seats. Make sure you stay awake though, as many vendors selling the same thing will ask you again and again and again. No matter if the vendor in front heard you say no, the other five behind him will push you to say yes.

Henry Bateman writes: Although being the backbone of Manila’s public transport system, jeepneys traverse a pre-determined route of 10 to 15 kms. This means to get across town you will need an intricate knowledge of Metro Manila geography to negotiate the 3 to 5 rides required. An alternative, if you are headed for a popular destination is to catch a bus. Buses in the Philippines come in two varieties, ordinary and airconditioned.

Ordinary buses are very ordinary. The glass in the windows has either departed for a life of luxury in more hospitable surroundings or is locked in place from years of inaction. Although the seating is across the vehicle rather than running down the sides, it is of the bench variety and, more often than not, unpadded. As most buses ply the major thoroughfares, the exhaust fumes from other road users are an added extra. The ordinary bus is a couple of pesos cheaper than its up-market cousin, the aircon bus.

An aircon bus will have its windows in place plus padded seating — three on one side of the aisle, two on the other. “Fresh” air will be pumped at you from adjustable, little vents in the overhead luggage rack and sometimes they are actually adjustable. On most aircon buses there will be curtains on the windows which are very handy at high noon. If you want to watch the passing parade, push them to one side and peer through a couple of week’s accumulated grit. Aircon buses also have a “video on board,” a selling point proudly announced above the windscreen.

Suburban buses don’t run to a time table they just ply back and forth along their route. Buses to the provinces do depart at predetermined times from their terminus and it is wise to check the times with your chosen carrier of which there are many.

All buses have a conductor who collects the fares, which are determined on the distance you are traveling. You will be issued with a paper ticket which either looks like a chook raffle stub or one printed with an intricate series of little boxes into which the conductor will punch an array of holes. The reading of these tickets is a science in itself.

The conductor also touts loudly for potential customers at designated stops or at pedestrians who are looking in his direction. A customer is a customer; one getting off is making room for another to get on. Consequently, a bus will stop to set down or pick up a passenger anywhere along its route.

To hail a bus, as with jeepneys, attract the attention of either the driver or the conductor of your chosen carrier. This can be determined by the destination notice hanging on the windscreen, from the shouts of the conductor or the sign in his hand. Along the way, street sellers will board to hawk their wares of snacks, drinks and trinkets before getting off the next time the bus stops.

On provincial buses it’s not advisable to sit too close to the front unless you’re a seasoned traveler. On a trip back from the province of Nueva Ecija I noticed a fellow Kano (foreigner) seated right behind the driver. When we stopped for a comfort rest halfway through the journey his knuckles were white. He swore we had spent at least a third of the trip on the wrong side of the road.

Even if you’re not in the city, fear not, provincial buses like their suburban counterparts will pick up passengers along the way. When all the seats are full, little stools appear so customers can sit in the isle.

There is always room for one more.

Henry Bateman is an Australian artist and freelance writer living in the Philippines. His writing has been published in the Expat Travel and Lifestyle Magazine, the Expat Newspaper and the Western Review. He blogs at The Expat, which is not updated as often as it should be