You are here: Home / Archives for Land Transportations

Having your own transport in the Philippines can sometimes mean you may be “picked on” by Police and authorities for special “fines”, it is just the way it is. Having a motor bike is easy for the police to impound for many reasons and any accidents or issues it is normally always the foreigner at fault.

My friend from the UK is staying here for a few months, and it’s his 5th or 6th visit, so he purchased a motorbike that he keeps here. It is true to say that the rules of the road in the Philippines are a lot different from what the US and the UK have, so it’s important to take your time and get to know the unwritten rules of the road, of which there seem to be thousands.

He has with his bike all the paperwork, all correct insurance and everything is all official, as being a white guy on a bike, he rather sticks out, and has been subject to Police stops that seem to involve money to get on the road again. 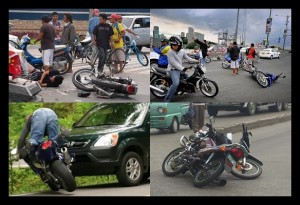 By now a small crowd gathered, so I just let the arguing start

But a couple of years ago he had a small incident that really shook him up and showed the pitfalls of being a foreigner on a motorbike.

Another motorbike driver ran into my friend, it was totally his fault, as he was not watching the traffic in front of him, my friend was stationary, and with me on the back too, we remained upright, but the other driver spun and came off his bike, in the middle of the road. Of course, the first thing I did was run from the bike to his assistance, and as soon as he saw that a foreigner was there, he was to say the least surprised.

I got him to his feet and to the side of the road, and all he appeared to have was a grazed foot, but seeing me, he decided he wanted to go to hospital; of course this would cost money, which I doubt he was going to pay for. It’s important not to inflame the situation here, so I said move your bike off the road and we talk, which he did without any problem.  Taking the bike off the road was lucky for me, as the rules here are that an accident to which you need to have the Police in attendance, or you need to exchange Insurance details, the vehicles must stay in place, even if that means blocking the road.

When he came back, he started saying he was in pain, and his bike damaged, and he has no money.  By now a small crowd gathered, so I just let the arguing start.  I went into a shop got some water, and came back.

I asked him why he wanted to go to the Hospital, as he seemed OK. It was my understanding that he wanted some monies for an accident that he caused.  Lucky for me the crowd did not seem to be on his side. I STRESS, stay calm all the time, do not let emotions get to you, as this will for sure fire up the situation.

To cut a story short, what was NOT our fault, could have cost hundreds of dollars, but because I maintained my calm and kept talking him down, it cost four dollars for a band aid. If I had shouted and screamed, the crowd would have probably said I was a bossy foreigner, and would have not helped me make the driver aware of what he had done. 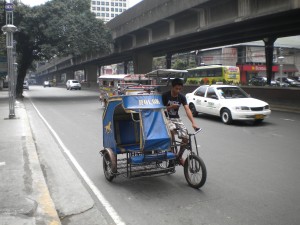 This can be considered the silent version of tricycles, since bicycles are used, there are a lot of Pedi cabs around, a form of making a quid for the locals as a motorized tricycles is beyond there reach financially

This environment friendly type of transportation is very common in places  with a passenger and cab attached to the side or in front. The driver uses pedal power to transport passengers. Rates are very cheap to travel. Normally you will see Pedi-Cabs on side streets and some subdivisions which do not allowed tricycles to enter. 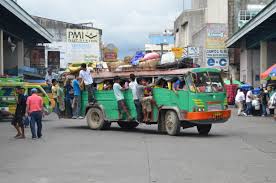 These are smaller versions of buses that can ferry passengers for terminal to terminal. Depending on where the minibuses are operating, they are either used for short distance or for longer land travel, particularly in some far-flung areas where any other means of transportation are few and/or limited. They can carry people, livestock and other merchandise. Minibuses are much cheaper, do not have air conditioning and seats are small and spaced close together, had my experience going from Infanta Quezon to Paete.

More fun and transport in the Philippines.

A few years ago I my friend from the UK has been staying with me in Davao City. Its true to say that when he purchased a motorbike from a friend and owner of a motorbike shop here in Davao City, I was suspicious of the anomalies in the paperwork, as the six month old second hand bike with one previous owner seemed to have had a two year “missing history” when you tried to match the LTO paperwork. 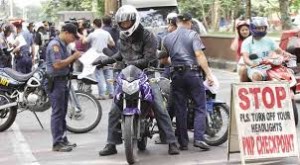 LTO said the bike would have to “pass” a physical check to sell, this was done at another location in Davao

Anyway being the legal owner, it was not long before this bike became homesick, it always wanted to go back to the garage every two or three weeks for “small” repairs, this went on and on, no sooner was the bike roadworthy then it would just stop, each problem would be slightly different than the other, and over the years of course was a good way to throw away cash.

On my friends last visit after two or three breakdowns he just had enough, and wanted to get rid of the bike, as now it was not even able to start at all, he decided just to scrap it. So with a friend he went to LTO (Land Transportation Office – the Philippine regulatory office with regard to motorbikes and cars), and with all the correct paperwork wanted to just scrap the bike, so he had no more legal responsibility for it, just in case it turned up in a years time in accident. LTO had no idea how to do that, none, so in desperation his friend agreed to buy it off him for parts, but LTO said the bike would have to “pass” a physical check to sell, this was done at another location in Davao.

Trying to explain that his friend wanted to buy the bike for parts, and besides the bike was not able to move, LTO said that was the rules and they had no idea to scrap a vehicle,we were not going to leave it to rust on a roadside, as if it was used and in an accident, it could be tracked back to my friend, who we would be sure would be blamed in some way.

We found out that the new battery installed a few weeks before was an old one, the motorbike shop insisted that a battery only lasts that long. It was beyond arguing, and realizing it was just a rip off, we managed to get an attorney to do all the correct documentation, and “sell”  it on without having to worry about it showing up under a jeepney in a months time.

The funny thing was I asked all my friends, some with bike and some without, how they would scrap a bike, like LTO they had no idea, they insisted it was just left, and the problem would go away. Maybe I should have just done that? 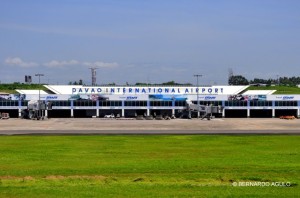 Davao airport is OK, its normally efficient and reasonable, and there are coffee shops before you go through to the gate that are perfectly OK. I was told that a new coffee shop opened past the gate, so I felt I would give it a chance. When I went in there it was well laid out, very bright, and so clogged up in smoke, that I doubt I would have seen the sandwich let alone taste it. So, about turn and off to another coffee shop past the gates, this was NO SMOKING, so I was already pleased.

I went to the counter and a young lady chewing gum played a new game with me. From the huge menu I managed to chose everything that was not available, even managed to get told four times that coffee was not available, but if my finger crossed to the next line on the menu it was available. Myself and my friend Steve just started to laugh at the absurdness of it, but the lady kept going, still chewing gum, and finally we managed to order a coffee and an ice tea and toast and something.  I say “something” as we both just left it on the plate.  As we left, we noticed many other people pushing the “food” around the plate with a confused look.

Sitting at the gate we watched our plane change gates, then we boarded and had a form of “LOTTO” game on board, before landing at Manila, and feeling a little hungry we decide to cross the road to get a McDonald’s, we had to walk halfway around the perimeter of the airport, as the stairs to the road were closed, and the bridge across the road only went half way.

After being fed and watered we had to get a taxi to New Manila, and that became the Manila curse, as the first one wanted a figure equal to me buying his taxi, the second wanted slightly lower, but when I disagreed he suddenly had no idea where New Manila was. After getting in and out of two Taxis and being brushed off by another two, we finally had a driver who must have been the greatest taxi driver in Manila, as he went down so many side roads, we arrived in good time, and gave him a good tip.

A few days later myself and a friend were going to Baguio, so we decided to get up at 5.30 to get the 7am bus.  Well we finally managed to get up at 6am, rushed out and knowing the bus station was only ten minutes away we tried to hail a taxi.  Twenty minutes later we were still there, but no problem we still had time. Eventually we got a taxi, twenty minutes to go, so we would still be OK to get the bus.

The taxi dropped us at the Victory coach station and drove off, yes it was Victory Liner station, but the coaches were asleep, as this was NOT the terminal, just the maintenance depot.

So we had to get a motor cycle to the real station, still with time to spare,  we purchased  the tickets ready to board the bus. The bus had gone, it was still not 7am, around 6.50, the bus went because the clock on the bus station  wall was was wrong, but never mind that’s the time he was going by.