You are here: Home / Railway Transportations / Manila LRT and MRT

LRT vs. MRT: What’s the difference? 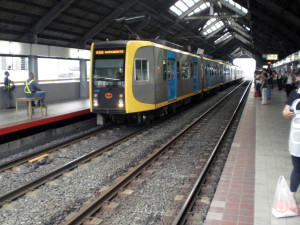 I used to think they’re both the same animal being saddled with two names until someone pointed out that that there is an LRT rail while this here is an MRT rail, etc. so yeah, you can imagine how dumb I felt. What’s the difference anyway? Is one more high-end than the other, and thus more expensive? How much exactly? Do they take different routes MRT runs along the entire length of EDSA from North Avenue in QC up to Taft Avenue in Pasay. The old LRT is from Balintawak in Caloocan to Baclaran, and the new LRT.. Marikina until Recto. The old LRT reserves the first car exclusively for women. Too many groping

Manila has the Philippines’ only metro. However, the three unique lines serve many nearby cities which are independent by their own rights, such as Makati and Quezon City. Both LRT1 and LRT2 lines follow the routes of lines set up by Meralco, the city’s tram owner and still it’s electric company, in 1913. In 2003, the various transit agencies were merged into the Strong Republic Transit System, or SRTS, formerly the WRTS.  Line numbers were changed into colors. No Frills Light Rail Line 1 is a fully elevated light rail line. Opened in 1984, it currently runs through 15 miles and 18 stations along Rizal and Taft Avenues.   A 5.7 km, 3 station extension to Quezon City opened in March 2010, forming a loop with Line 3 and becoming a virtual Circle Lines. A 1 km south extension is also in the early planning stages. The line is on a pre-cast concrete structure 7 m above the street, specially designed to withstand earthquakes. The track and cars have been refurbished as it became so popular that it quickly wore down due to poor maintenance and cheap construction that cost less than Imelda Marcos’s shoe holders.

At one point in 1990, trains actually crept into Central Station due to cracks in the supporting beams below! Original cars had no air conditioning, which made them not only comfortable but quite pleasant-smelling. New rolling stock all have air conditioning, ensuring a much different ride. Line 2, also known as the Purple Line, LRT2, or, my personal favourite, “The Megatren“. (Sounds like something you’d find in John Holmes medicine cabinet, doesn’t it?). The 13.8 km Megatren runs east-west and is elevated except for the humble underground Katipunan station. The line will eventually be 17.8 km with 11 stations

It opened in 2003. Unlike lines one and three, it runs full metro cars. Line 3, also known as MRT3 and more commonly as Metrostar, is also completely elevated except for the underground Buendia station, which transforms the elevated metro to a subway. It is 16.9 km and opened in 1999. Another 7.2 km are under construction. A major passenger complaint is that in the process of trying to save money, elevators and escalators were deleted from the building plans.

This made using the metro especially annoying during Manila’s ice cold tropical summers. High fares, the lack of lifts and escalators also kept the ridership below original projections. As you might guess, Imelda also had a hand in the planning of Line 3. Some say that if you think happy thoughts just before the Metrostar closes, you can see her changing her shoes near the station stairway. Monorail A 12.5 km monorail project connecting Line 3’s Guadalupe Station with Manila’s airport is under construction and scheduled to open in 2016. Also under construction and due to open in 2016 is a 13 station, 7 km Automated Guideway monorail (below) which will serve the University of the Philippines.